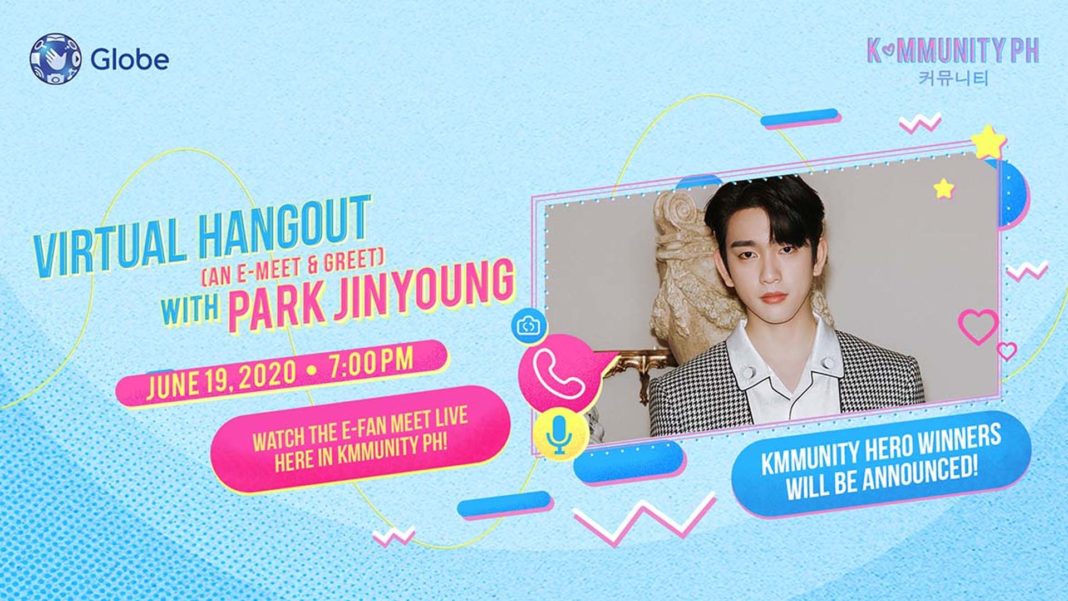 Despite majority of concerts getting cancelled this year, Globe continues to find ways to treat its loyal subscribers with special surprises.

Jinyoung is a South Korean singer, songwriter and actor who made his acting debut in the drama Dream High 2 in 2012. He also appeared in K-dramas like Legend of the Blue Sea, He is My Love and, When a Man Falls in Love. His most recent work is the fantasy romance drama He is Psychometric where Jinyoung plays the main character.

Jinyoung already expressed his excitement in meeting his loyal Filipino fans.
To give Filipino K-Pop fans an even sweeter chance to meet their idols for free, Globe will be hosting a virtual hangout right in the Facebook group they created for hallyu fans of all kinds.

In a video sent by the Korean pop star himself, Jinyoung greeted his fans with an excited “Mabuhay! Kamusta kayo?”. He then proceeded to invite all his Filipino fans to an exclusive e-meet to be hosted on Globe’s K-mmunity PH Facebook Group on June 19 at 7 p.m.
“Thank you Globe for giving me the chance to meet all of my fans from the Philippines,” said the star.

To top off the sweet message, Jinyoung flashed his signature finger hearts and exclaimed a sincere “Mahal ko kayo! Ingat!”.

To watch the e-meet and greet with Jinyoung, fans can stream the event via Globe’s Kmmunity PH group. For super fans who want to be part of the virtual hangout and interact with the GOT7 members, they have a chance to win a few select spots by joining Globe’s Ultimate Stan contest.

Fans who get a slot to be part of the E-Meet and Greet can expect a night full of fun activities and games as well as enjoy special performances and interviews with Jinyoung.
Join the Kmmunity PH Facebook group now to get the newest Kpop updates and to win special prizes and exclusive invites to fun K-culture activities.

To make sure that you do not miss out on anything during the virtual hangout, you may subscribe to Globe’s Go50 which give you up to 5GB data for all sites that is valid for 3 days, combined with GoKorean10 booster for an additional 1GB for K-apps that is valid for 1 day.

Globe at Home subscribers may subscribe to HomeWatch199 that gives them up to 6GB data for all sites and 4GB daily data allocation for video with 7 days validity.