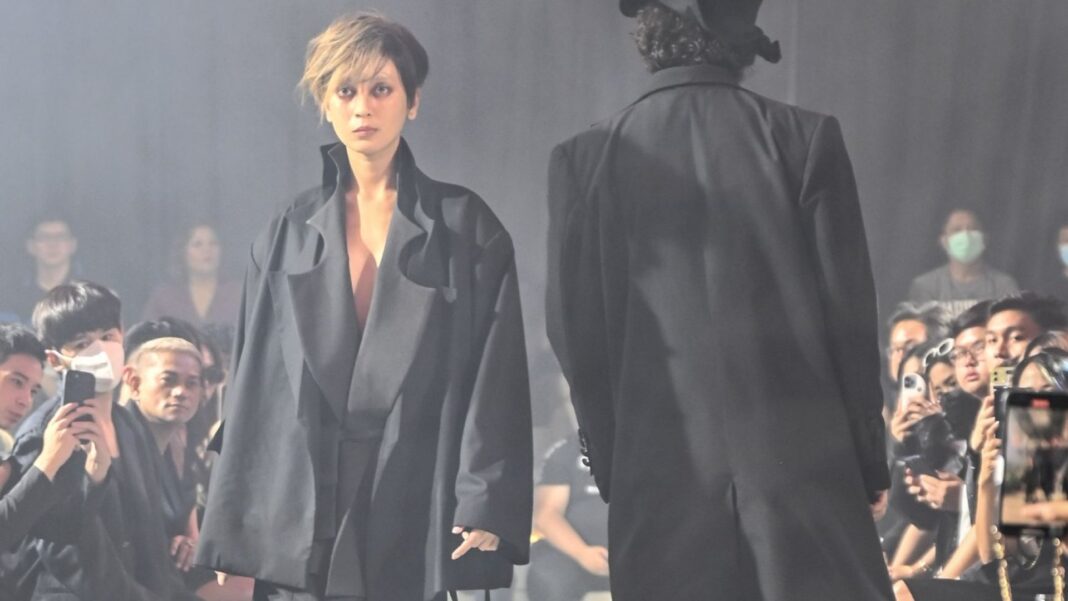 Share Tweet
Manila’s stylish crop witness the exclusive runway presentation, marking the launch of high-fashion streetwear brand ARCHIVES
The future meets the present as Ellis Co, 21, presented his debut collection with the idea of déjà vu in mind. Dubbed “Memoirs of the Future,” the fall 2022 collection marked the coming of his high-fashion streetwear brand ARCHIVES.
“I chose the brand name ARCHIVES because the clothes that I design are timeless and lasting pieces, and in itself, a collection of historical records,” Ellis, the brand’s founder and director of design, said. “I perceive these pieces as the remnants of me as a designer for years to come, and years after I’m gone.”
Described as a fashion presentation beyond the traditional runway, the “Memoirs of the Future” show was truly a multisensory experience envisioned by the young designer. To make this fashion time travel possible, he worked with director Frank Mamaril to bring his vision come to life. And on July 27, 2022, Whitespace Manila in Makati City was transformed into a portal where guests got a glimpse of the future of fashion through Ellis’ designs, with the help of ARCHIVES’ creative director Reika Mayani.
The guiding theme of the collection is Ellis’ passion for eco-brutalism, modernity, and the Japanese fashion aesthetic. These themes were echoed in the many elements of the event starting with the food. Featuring the culinary works of chef Margarita Fores, Manila’s most fashionable crowd was treated to a modern gastronomic journey as the first part of the ARCHIVES experience. Upon entering the show’s venue, guests were instantly transported to the future. Like a scene from a dystopian film, the space was an arena where gray angular structures were complemented with lush greens, offering the perfect set to Ellis’ designs.
Opening the show were the musicians from the Manila String Machine, setting the mood as they performed Vivaldi’s The Four Seasons, Concerto No. 2, “Summer” III. Presto. The string musician’s performance didn’t end there. Throughout the show, they played melodies accompanying the contemporary beats of the music produced by Ellis, another nod to the future-meets-now theme. 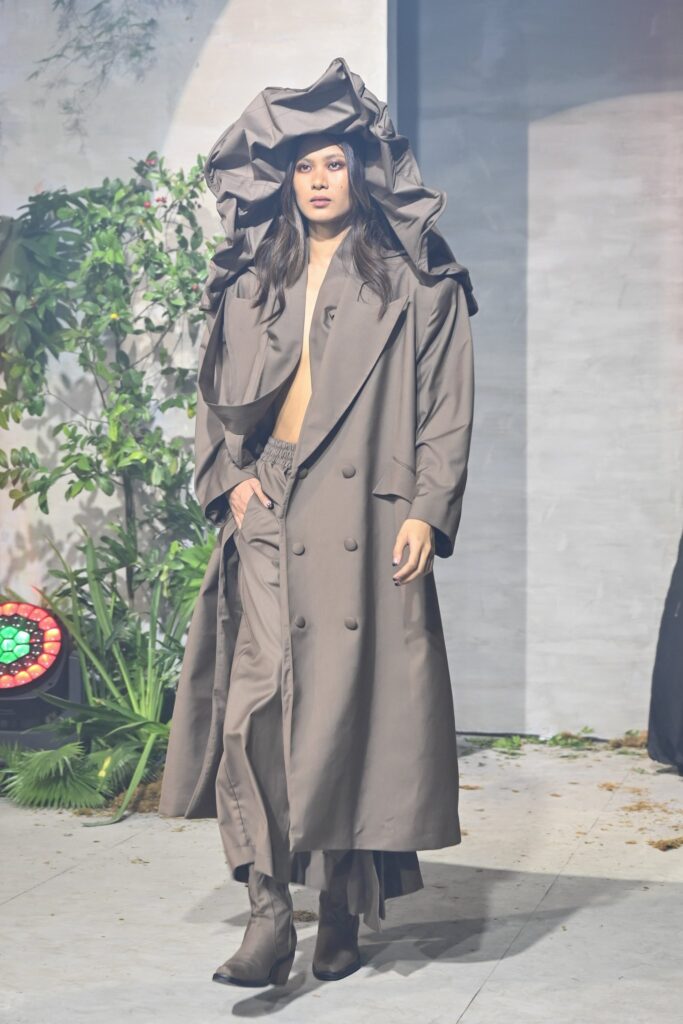 As the fog began to rise, models walked the runway wearing Ellis’ designs. “Memoirs of the Future” presented a total of 44 looks, divided into segments for the show. It started with a parade of black, giving a first look at the designer’s take on unconventional proportions. Outerwear was reimagined into oversized pieces with obi belts and curved cut lapels—the designer’s signature touch. Breaking the dark and gloomy display was a white garb with a flounced hat that was so dramatic it took everyone’s breath away. 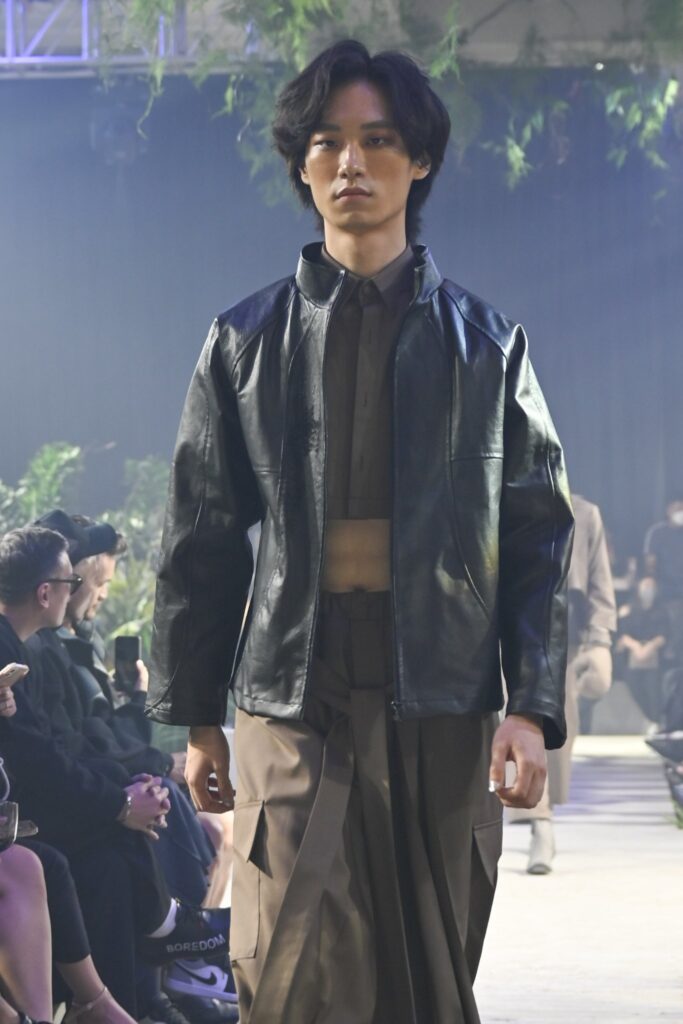 Following it was Ellis’ play on neutrals and fall dressing. Classic pairings like the black dress with a trench coat and puffer coats and cargo-like pants got a new look with his exploration of structure and silhouettes. Ending the show was a display of his gray designs making it a true fashion display for the cool kids of today.
“When I design, I’m very focused on the silhouette, how the shape looks, how the piece drops on the body, especially, the minor details,” Ellis said. “Basically, I’m trying to make something that hasn’t been done yet but is still familiar. I try to find the familiarity in the unfamiliar.”
Apart from Ellis’ inspiration, what made this collection unique was his addition of boxing gloves and head gears to some of the pieces. This is another personal stamp of the designer as prior to becoming a self-taught architect, music producer, and designer, he also has a background in boxing.
Another recurring theme in the show is androgyny. Aside from the clothes, a sense of gender neutrality was also present in the models’ makeup. To achieve that, Ellis worked with makeup artist Gery Penaso. Much like future humans out of hibernation pods, the female and male models sported an elevated bedhead look—burgundy eyes, bleached brows, and raw and unpolished hair with metallic tipped nails completing the whole vibe.
“The collection is very detailed. I want to make sure that we apply it also to the beauty looks,” Gery said. “It is very rare on the runway to have nails also done. When they all come down to the runway, they look very cohesive”
Ending the fashion presentation on a high note were the electrifying performances by Jalen Davis, popularly known as MDMA or Molly (an American recording artist from Atlanta, Georgia) while DJ Patty Tiu played the coolest music for the night crowd.
“There are standards for quality, but when it comes to creativity, fashion is a medium,” Ellis said. “Whatever you create through fabric, that’s your own original design. It is just like music and painting, but your tool is the fabric. Fashion is an art form.”
To stay updated about “Memoirs of the Future,” visit Archives’ official Instagram page @archives.galerie.
- Advertisement (300x250) -