With numerous recognitions and student achievements, 2019 was a spectacular year for Far Eastern University (FEU). This was emphasized by its Chair Emeritus Dr. Lourdes R. Montinola during the wreath-laying ceremony of the school’s 92nd anniversary this February 2020.

“My father always stood for excellence and I think he would be happy to see the direction FEU is now going at the start of its 92nd year,” says Dr. Montinola, the only surviving daughter of founder Nicanor Reyes Sr. “This is his vision for FEU: to see a community of Filipinos thrive because of education.”

This banner year is at the tail end of a bold, half-decade vision that pushed the institution to be even better than it already is.

During Academic Year 2014-2015, FEU’s Board of Trustees and senior management team established an institutional aspiration by 2020—that the school be one of the top five universities in the Philippines.

They measure this goal into three objectives. That FEU continues its nine-decade run of offering quality higher education; that it produces competent and world-ready students; and it fulfills its educational mission with operational excellence and financial soundness.

Fast forward to 2019, and the school is still on track with all three objectives.

Last year, the school continued its thrust to offer quality education. It won two Golden Arrowheads Recognition for the ASEAN Corporate Governance. The school was also acknowledged as one of the Top 5 Philippine Publicly Listed Companies in the Services Sector, and the only educational institution in the country to be so. Furthermore, the school won the 2019 Asia Pacific Entrepreneurship Awards Philippines’ for the Education and Training Industry.

Finally, FEU’s infrastructure developments in 2019 fulfilled its third objective. As of February, the university is developing a 4-story building for its Diliman campus, a 6-story building in FEU Roosevelt Marikina, and an 8-story building in Lerma. Construction of a new Student Center at the ground floor of the Education Building of its Manila campus will also commence this month.

Furthermore, FEU inaugurated the Our Lady of Lourdes Chapel in its Alabang campus as it continues its commitment to invest in the field of arts and culture. Likewise, the school is also finishing plans for the renovation of the Arts Building in its Manila campus and is building a high school in FEU Roosevelt Cainta among other infrastructure developments. So far the school has finished renovating its new University Health Services clinic, the Registrar’s Office, and the Admissions Office. 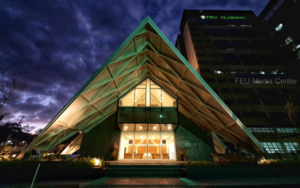 FEU launches the Our Lady of Lourdes Chapel in Alabang.

Despite all of these successes and initiatives, FEU understands that much more is needed to be done to fully realize its aspirations. Yet, the zeal and commitment of its students, faculty, personnel, and leaders alike continue to grow stronger and ever tangible than before.

“We will continue to move onward for our dream,” says Dr. Montinola. “We will Be Brave As One to overcome our new challenges. That has always been the FEU way”.